Jason Aaron finishes his run on Star Wars with a whisper, rather than a bang in this collection of one-shots following the main characters doing different things and essentially tying up one loose thread, and it was rather disappointing.

The first part has Luke and Leia stranded on a planet until an Imperial entanglement gives him access to parts to fix their ship.

Sana Starros recruits Lando to help with a job where she double/triple crosses various gangs and the Empire to make a bunch of money and donate a lot of it to a hospital on her home planet.

Han and Chewie have to smuggle Grakkus the Hutt through Imperial Space to a safe house/prison on Akiva. Grakkus goads Solo about being the best Smuggler in the Galaxy who has turned soft and offers to give Han his old life back. There’s some back and forth which allows Han to find out about a stash of weapons the Hutt has hidden.

R2-D2 goes and rescues C-3PO on his own until he sends a message to the Rebellion before being chased by Vader in his TIE Advanced but is saved when Luke, The Falcon and Sana all show up.

Scar Squadron save a village from a war lord to be led to a Rebel Outpost which they wipe out and leave in ruins only for our heroes to arrive not long after.

A short story about a Tusken Raider child who is the only survivor of its clan is shunned by everyone as it looks for help before Obi-swan takes it to another clan.

And the third Annual where Han takes Leia on a mission to find a possible location for a base only to find it full of Rathtars. They are attacked by a mercenary who Solo did a job with and abandoned. The Falcon is damaged but they are rescued by Chewie.

Well… like I said, this collection was disappointing. For a writers final run on a series you expect something big, something that wraps up their loose threads maybe. Well we got one of those.

The individual stories, told from the perspective of one of the characters (except the R2 one, that seems to come from a Astromech Manual) and gives us their inner thoughts on where they are at this point in time and their place within the story. Which is ok, but the whole run feels like padding just to get to the end.

Out of all of them, my personal favourite was the Han and Chewie adventure. Aaron can write all the leads well but in this Han really shines.

Larroca continues to just copy shots of the actors from the films which is incredibly distracting and took me out of the stories he was artist on because seeing shots of Han from all three Original Trilogy films on almost one page just doesn’t feel right, in fact it feels lazy. The art itself is great but using it in this series just feels like Larroca just wants an easy run.

The return of SCAR Squadron was fun (if mass murder can be called fun) and I hope to see more of them in future issues. 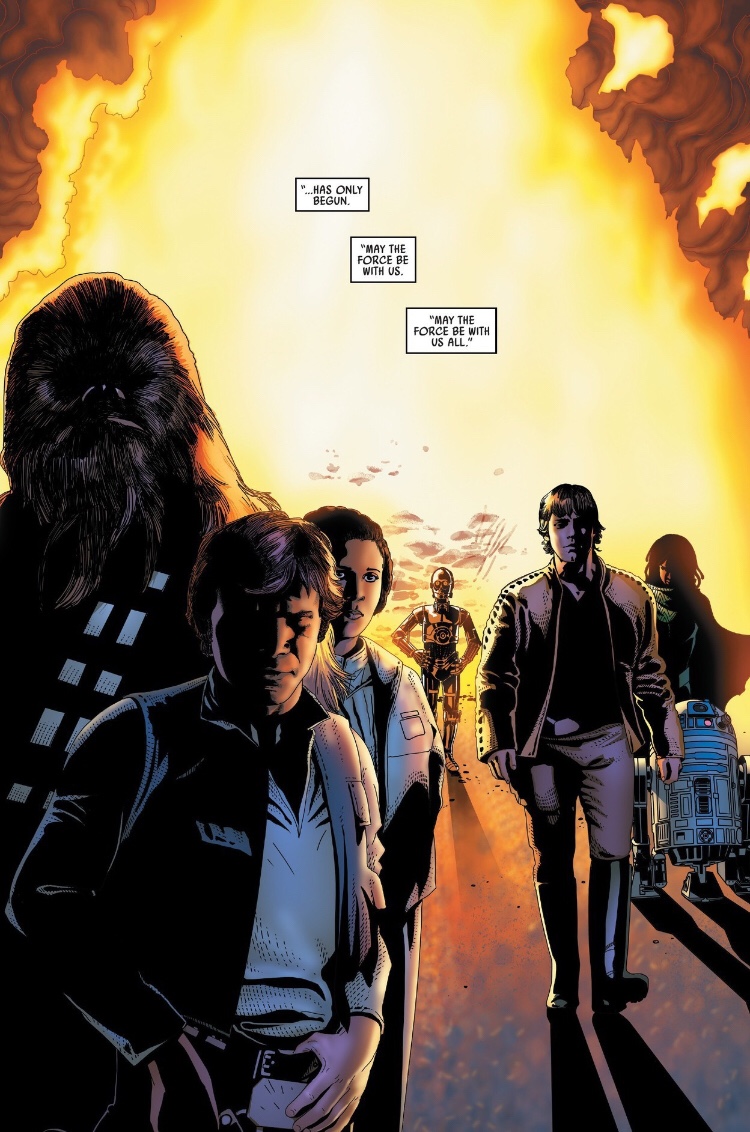 If it wasn’t considered canon and may have ties to future issues, at this point I would advise readers to steer clear of this book, but as I don’t know what lies ahead Incant recommend skipping it just yet.