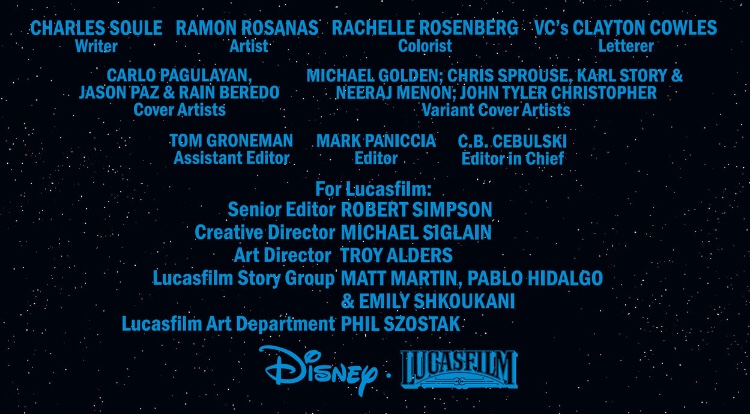 In the midst of battle, Commander Zahara finally comes face-to-face with her quarry, Leia Organa.

In a flashback, we see a conversation between Vader and Palpatine who tasks Vader with hunting down the Rebels after the events of ‘The Empire Strikes Back’ but Vader refuses but tasks Zahara, who has been overseeing an Imperial Mining Operation on Kessel to do the job.

As the Rebels Fourth Division takes the fight to Zahara’s fleet, with Leia on the Seventh Divisions flagship and Luke leading the fighter squadrons against the TIE Fighters.

Commander Zahara leads a Boarding Party who blast their way through Leia’s ship and sabotage the Engines, the only way to get them working again is to send Leia to her and she’ll reactivate them.

Leia goes to Zahara whilst Luke and the fighters along with Lando and Chewie in the Falcon manage to destroy enough enemy fighters to allow Wedge and the rest of the fighters on Home One a chance to join the battle.

Zahara taunts Leia in the engine room, firing at her from the shadows and attacking her with a sword. Zahara is ready to kill Leia but is thwarted by the arrival of Luke. Zahara threatens to kill Luke, but tells him that Vader wants him alive. The Imperial Fleet escapes after Zahara reaches her ship.

Zahara tells Lieutenant Gorr that even though she didn’t kill Leia this time, that she has gotten under Leia’s skin, and that will break Leia’s spirit bit-by-bit, which could lead to a bigger issue for the Rebellion.

This two-part story has been great. Full of action and character development, we really get to know Commander Zahara who looks to be the main antagonist of this run. We finally get a villain on the same level as Leia, Han had Boba Fett and Jabba, Luke had Vader and now Leia has an antagonist who will be a great foil for the Princess. I’d like to see a real game of Cat and Mouse between the two of them to really drive the series forward.

There is some amazing imagery of the space battle and the fighter dogfights, the fleet combat looks great too and the return of Wedge is great to see.

A short but memorable story arc that really places Zahara high on the list of memorable villains, her drive to avenge the memory of her former mentor, Tarkin and prove she is worthy of his forgiveness, even if he’s dead, just go to show how determined she is to accomplish her goals.

And with a new story arc about to start which looks like it will tie-in to the upcoming ‘High Republic’ in a big way, the anticipation can only get higher.