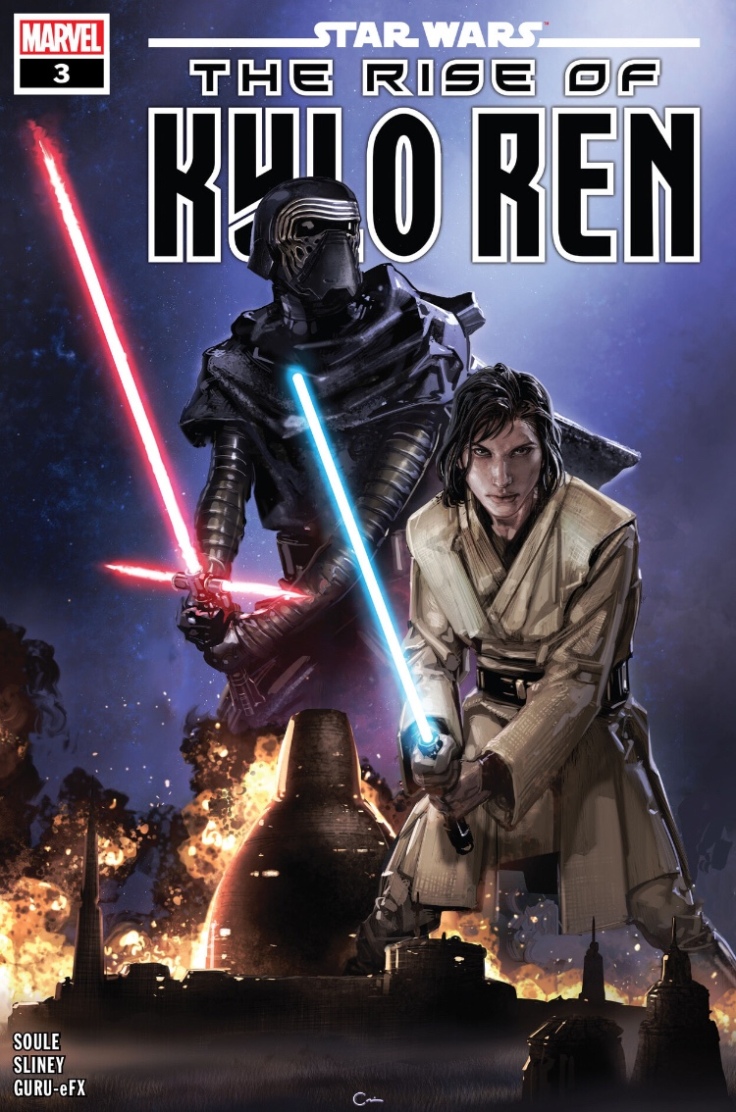 Ben Solo has finally found the Knights of Ren and he learns the price of joining them, a good death, or causing someone a good death.

Ben tells them about the battle between himself and the three Jedi Students who had been chasing him on Euphoria.

He managed to best two of them and killed the third before throwing the survivors into the hidden temple and bringing it down on them.

Ren listens to this story but tells Ben they aren’t good deaths, but thanks to Snoke the Knights are willing to give him a shot so they let him join them, essentially on a probationary basis. They give him a new outfit and head off.

In the ruins, the survivors, Voe and Ti, free themselves and get ready to go after Ben, now fully understanding that he is lost to the Dark Side.

This issue is essentially all about his fight with the Jedi Survivors, bookended by his meeting with the Knights of Ren and whilst it’s a solid issue, I’m wondering if the story could have been condensed slightly. Of course there is still one more issue to go so we don’t know how Soule will conclude the story, but I hope it’s not a action driven.

We get to see Ben’s moving towards the Dark Side more with his killing of Hennix but at the same time he tried to kill Voe but saved her at the last minute. You really get the sense that he’s trying to be evil more and more but just can’t take that final step (Han Solo?).

In terms of the next issue, Voe and Ti need to catch up with Ben and the Knights and end that plot line but there’s still so much I want to see, Ben forging his helmet for starters and the development of his lightsaber. It feels like a lot to put into one more issue, unless there are plans to do another mini-series telling more stories of his turn.

Not the best part of the story and it leaves a lot to expect from the final issue but a decent chapter in the fall of Ben Solo.