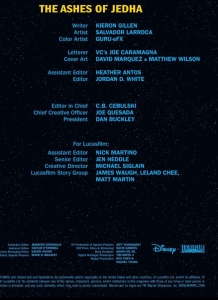 A mission to unite the former Partisans of Saw Gurrera and the Rebel Alliance sees Luke, Han, Leia and the Droids working with Benthic Two-Tubes and the rest of the freedom fighters on the ruined world of Jedha.

The Empire is continuing to strip-mine the planet of Kyber Crystals but due to the unstable nature of the planet, it’s going slowly. Enter Imperial Commander Kamchar who has brought Queen Trios of Shu-Torin, leader of a race of mining experts, who have come to fast-track the Kyber mining.

Kamchar orders that anyone who isn’t Imperial still on Jedha to be terminated that leads to a couple of encounters between the heroes and the Empire.

Luke meets a Force Sensitive amongst the freedom fighters and the two go to a Temple of one of the Force sects. The two experience visions through the broken Force coming from the planet, it turns Luke’s companion mad and he attacks Luke who kills him in self-defence.

The Empire unleashes the first of the Shu-Torin mining vehicles and the Rebels destroy it, leading Trios and Kamchar so send in a massive, city sized mining behemoth.

Leia gets a hold of the plans for the excavator and the Rebels come up with a strategy to destroy it. Luke and Leia take one group to infiltrate whilst Han and Chewie take another group to occupy the bridge. We find out that it was Queen Trios who leaked the plans, she has to work with the Empire but wishes to aid the fight against them.

Luke battles with Kamchar and manages to defeat him using an Ion blast that disables the Imperials cybernetic arms. Once on the bridge, Han realises they are too late (Luke and Kamchar’s fight did that), but they manage to direct the mining vessel into the void left by the Death Star blast.

The teams get off the vehicle in time, as does Queen Trios with Kamchar, her loyalty still not in question and the Rebels and Partisans part ways.

Gillen really takes the reigns of this series and makes it his own and wastes no time in re-introducing one of his original characters with Queen Trios and taking the series in a much faster paced direction that I felt was lacking in Jason Aaron’s run.

It was interesting to see the remnants of both Jedha and the Partisans on the planet, seeing their dedication to battling the Empire on this dying planet. Also the fact that the Force around the planet has become unbalanced and even dark in and of itself.

Larroca continues to stray shots of the characters from films, but seeing new characters in his style is refreshing, I don’t know if he based Queen Trios on anyone but seeing a not-so-familiar face in this was the least distracting character to look at.

The failings I see in Larroca’s art is when a character needs to use a facial expression not used in the films, which is problematic when the image is one of the best parts of the book showing some great character development. For me, and I have said it before, this art style is so problematic, it’s distracting to see exact shots from the films being used but then the characters don’t look right when there isn’t the reference material. The comics feel better when artists don’t rely on photo-realism but gives us characters that look like the actors. 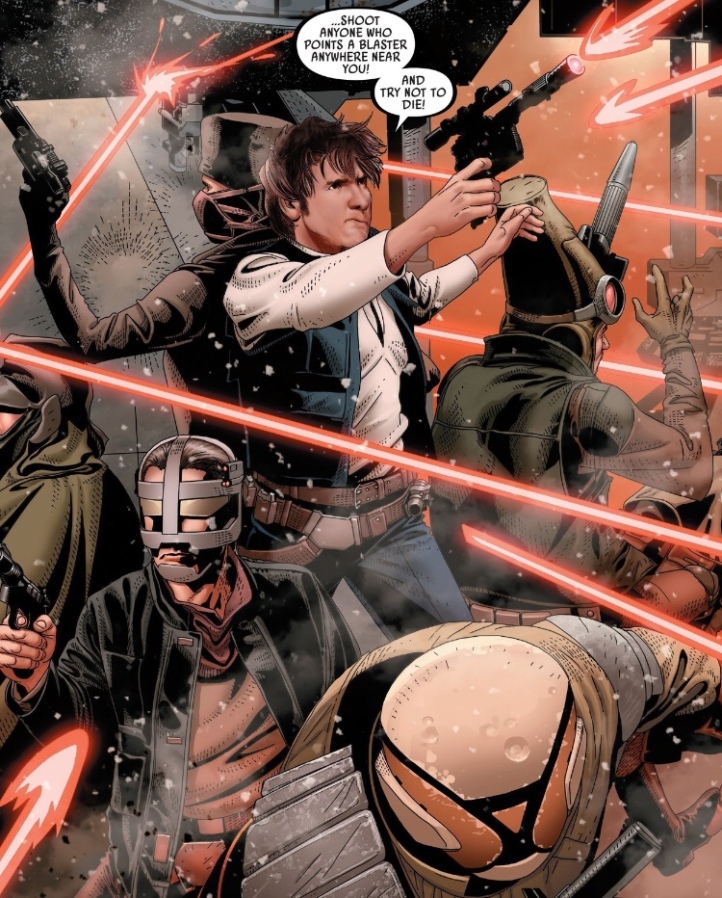 A solid start for Kieron Gillen but Larroca’s art leaves me wanting more yet again so I am really looking forward to getting to the next part of the series.