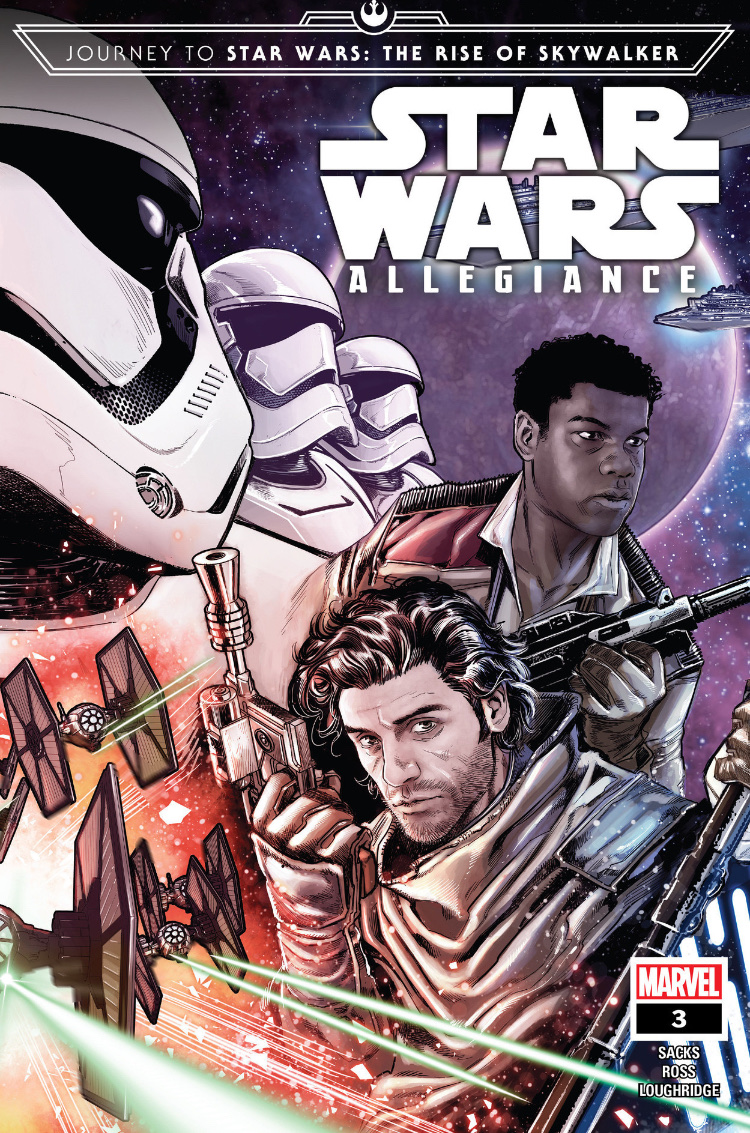 Starting back on Mon Cala, Rey, Rose and Chewie are being held prisoner whilst Leia attempts to plead with the council for their release. The head Quarren (who sold them out to the First Order) invokes and ancient right, a fight to the death, Rey agrees and it turns out she isn’t fighting a living being, but a rather large Clone Wars era Aqua-Droid.

Rey fights the Droid but realised it isn’t just targeting her, she manages to keep it occupied when it suddenly gets hit. Y a blast bolt and it turns out Rose pulled the trigger.

As the rules of combat were broken, the Resistance heroes are banished from the planet and as they are loading a shuttle Rey notices someone carrying something they doesn’t belong to them. She gets everyone to cover before the ship explodes.

Meanwhile on the moon of Avedot, Finn attempts to distract the Bounty Hunters long enough for Poe and BB-8 to load their ship with the weapons they were sent to find.

On Anoat, Lieutenant Connix receives intel that The First Order are en route to Mon Cala.

One thing that really stuck out for me was the lack of The First Order storyline, however, based on the evens of this issue I can guess that there will be a lot of First Order action next issue.

I’m really enjoying having the two teams separate storylines. It’s a lot of fun having Finn and Poe working together and taking Rose and putting her with the others really let’s her character shine, and kick some Aqua-Droid ass!

It’s great seeing the Finn and Poe dynamic in full swing. They were one of the highlights for me in ‘The Force Awakens’ and so having them on a mission with BB-8 is great fun and the fact they are up against a group of Bounty Hunters gives us some fresh faces rather than just another group of First Order goons.

In terms of the plot and it’s pacing we are heading towards the endgame in Issue 4. The First Order a will make it to Mon Cala, after a battle the Mon Cala will join with Leia and the Resistance and Finn and Poe will make their escape. I’m not privy to any inside info but as this is a prelude to a film where all of these characters are present I’m making as educated a guess that I can make about the overall story.

In terms of the characters’ individual arcs I am most interested in seeing how Rey manages to overcome her issues. She’s far to impetuous and eager for action and adventure (cue Yoda’s speech about adventure and excitement) and has much to learn about being able to remain calm. I think we can say that this is more about the changes she has gone through, her life before ‘The Force Awakens’ was a constant battle to survive and now she’s with the Resistance and on the run. I’m looking forward to picking up ‘Spark of Resistance’ and ‘Resistance Reborn’ to help flesh out Rey’s story between ‘The Last Jedi’ and ‘Rise of Skywalker’ and see where her character ends up emotionally by the time of the events of the film.

And finally, Rose is really coming into her own through this series and we are really getting to see her character expand from where we met her in ‘The Last Jedi’ and I’m getting more and more excited to see her in ‘The Rise of Skywalker’.

Once again a great issue, the writing is great and the art is beautiful and what more could we ask for from a Star Wars comic?