Happy Birthday to me!

Once again, like it is every year, the end of May heralded the anniversary of my birth, and in the traditional fashion, gifts were bestowed upon me. Mostly various means of currency with which more items shall be purchased (probably Lego… in fact most definitely Lego). But of course, there was one gift I opened very excitedly (with my daughters help)…

It’s 1007 pieces of pure Bounty Hunter brilliance. First off, I do like the style of the 20th Anniversary packaging, it really gives off a vintage vibe, not of the older Lego sets (except of course the logo) but of the old Kenner toys, and looking at the box, makes the whole thing feel special.

Inside the box are eight numbered bags, a small sticker sheet and the instruction book, which also includes a small section at the front that gives some info on the original version of the Lego Slave 1 that came out in 2000, but more on that later-on.

As is the case with most of the larger sets, Bag 1 builds the backbone of the set, using Technic bricks and pins to make a sturdy base. It does have some of the beginnings of the ships design with the few dark red bricks at the edges.

To sweeten the deal in Bag 1, we get to of the mini-figs, Boba Fett who I believe has had a design update and an ‘Empire Strikes Back’ Han Solo, sporting the dark blue jacket he wears through the film. Both come with blasters, Han’s is a standard Star Wars Blaster whilst Fett’s has been redesigned from his inclusion in the Desert Skiff and Carbon Freeze Chamber sets.

The base starts to really take shape in Bag 2 with the addition of more red bricks and the middle of the base being added.

Bag 3 adds the details to the rear of the ship, including the four engines, piping, a place to store a pair of weapons and the Technic-built handle that folds away easily but adds a great amount of playability, allowing you to swoosh the ship around with ease, as well as being able to land it flat.

Bag 4 really fills in the base of the ship and it looks great, it has the signature curved base that the ship has on screen and more Technic pieces are put in place for the cockpit that will come later. Whilst looking great there are a few pieces that aren’t solidly placed and at this point feel a bit loose but that may be remedied by the time the ship is finished.

Bag 5 starts putting the rest of the ship together. The core of the top part of the ship is added in this bag and also the seat for the cockpit. Close to the top are the two spring loaded missile launchers. The set is really taking shape now and lots of detail is coming through with the building techniques and the different coloured bricks. There is even a 1×2 slope piece with printed design for in the cockpit which is pretty cool.

The core structure is held solidly in place with the protruding Technic beams and pinned in place. It’s a solid connection which gives the set a feeling of durability. 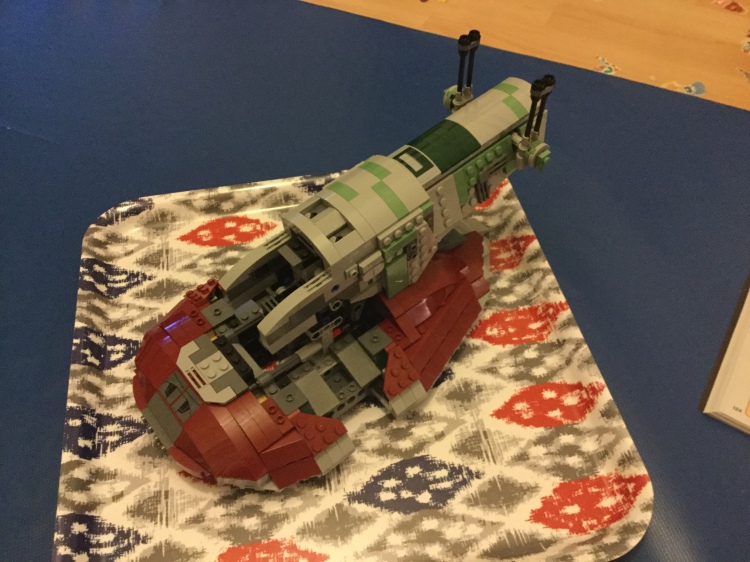 Bag 6 fleshes out the bottom half of the cockpit section of the ship as well as adding walls to the cockpit interior.

The use of plates and small pieces really show off the details of the ship.

The design of the blasters is great, they look so spot on and it’s all down to some amazing building techniques that I would never have thought of if I was designing sets myself. 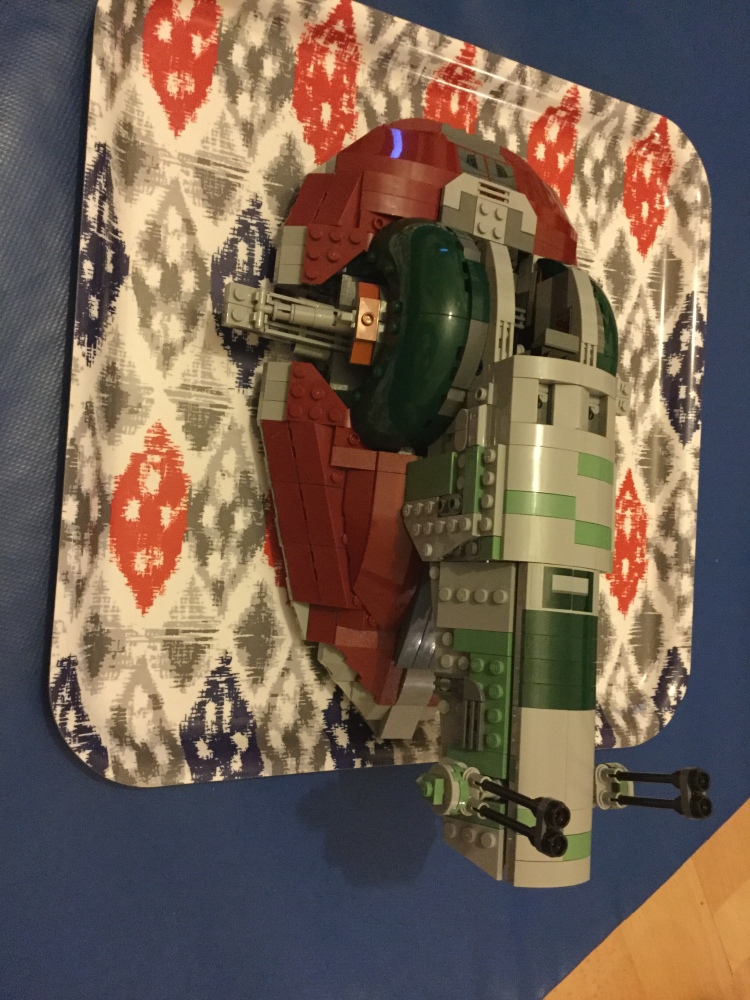 Bag 7 follow out the top half of the cockpit section, adding the domes above the wings and the struts that the wings will attach to.

Bag 8 completes the set and it looks amazing. The greebling on the wings as well as the stickers give them an amazingly detailed look. The fact that the wings and cockpit rotate, on their own, when moving the set from landing to flight positions, to me at least, is a work of genius.

My only issue is that the set doesn’t stand up on its own, so to help with that I found an easy to build stand on Facebook courtesy of a man called Joe Enochs in the ‘LEGO Star Wars Fans’ group who brought it to my attention.

When stood up this set just looks even better and incredibly imposing, it may be smaller than the Millennium Falcon sets but it feels just as robust.

Of course, a Slave 1 set wouldn’t be complete without a Han in Carbonite figure, which I believe is the same one used in the ‘Carbon Freeze Chamber’ from a couple of years back (which I reviewed HERE) and it looks great. 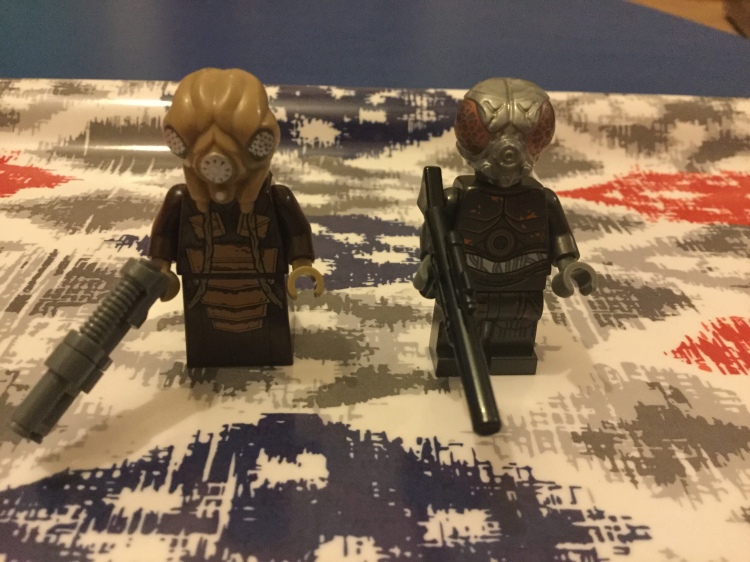 We also get two more regular mini-dogs. 4-LOM, who comes with a sniper blaster, who was previously released in the ‘Bounty Hunter Speeder Bike’ Battle Pack and for the first time EVER, the Gand Bounty Hunter Zuckuss who has a buildable blaster. The designs on both mini-figs are great and Zuckuss uses the new cloak/skirt brick for his lower half.

All in all, I really love this set. It’s a great build and incredibly screen-accurate with a great selection of mini-figs.

This is the first Slave 1 set I have owned, but I did build the original one for a friend of the family’s son on his birthday as he found it tough and needed help (and ended up doing none of it). Back then, the building techniques were completely different and the selection of bricks available was limited but even then, I remember being disappointed with that version. Of course as sets have grown in size, new building techniques have been developed and new bricks have been introduced, the evolution of Lego Star Wars sets has been incredible over the past 20 years.

And speaking of 20 Years. As this is one of the 20th Anniversary sets, it comes with a replica mini-figure from the early days of Star Wars Lego. This set comes with Princess Leia and I was so excited, even back then I never had a Leia mini-fig. It really takes me back to the days of yellow faces and mega-phone Blasters. And the base comes with a printed name and ’20 Years’ plate and can attach to the other replica mini-figs from this wave.