‘Last Flight of the Harbinger’ is the fourth volume of the Star Wars main title from Marvel Comics and it consists of Issues 20 – 25. Issue 20 is another Obi-Wan issue which I will cover at a later date.

Issue 21 is a stand-alone story featuring SCAR Squadron, an advanced team of Stormtroopers led by the Games master from the ‘Showdown on the Smugglers Moon’ story-arc whom has taken control of the Squadron after their former Sergeant was killed in action. The story follows the squad who are chasing down a band of Rebels through an abandoned city, picking them off one-by-one until the last survivor whom they torture for information.

It’s a really solid issue and a fun way to introduce some intriguing villains to the series, it also gives us a breather from the main characters whom we have been on a few adventures with by this point.

Issues 22 – 25 tell the main story where the Rebels are trying to send supplies to a planet that has been blockaded by the Empire. Luke and Leia come up with a plan to steal a Star Destroyer and fly it through the blockade.

The battle for the Harbinger is well played out and written in a way that you’re not quite sure as a reader, what they are actually doing. But to steal the ship they have to critically damage the main reactor and at the right time jettison it and escape into Hyperspace, making the escaping Imperials believe it has been destroyed, and it’s played out really well through Issue 22.

Issue 23 shows us in a flashback what the plan was and how it was executed before returning to the main timeline with Han and Leia bickering over who is to be the Captain of the ship until the Admiral arrives. Chewie is trying to keep the secondary reactor working and Luke and Sana go on patrol in TIE Fighters.

To decide who will Captain the ship, Han and Leia race through the ship and each tries to cheat their way to the finish with Leia winning and giving Han the position of Helmsman. Meanwhile Luke and Sana find the Admiral’s Shuttle but the Admiral is dead, tied to the hull of the ship. Sana destroys us but as they are distracted an Imperial Shuttle boards the Harbinger, it’s crew, SCAR Squadron who start to take out Rebels as they plan to take back the ship.

Issue 25 is all out war. Outside in space it’s the Harbinger and it’s Rebel Fighters against the Empire’s fleet, including Vader in his TIE Advanced. Inside it’s the Rebels vs. SCAR Squadron. Luke battles the Sergeant in a lightsaber duel, Han and Leia try to hold the bridge, Chewie takes on the biggest of the lot and Sana faces off against two of them who are trying to hack into the mainframe of the ship but are being held at bay by Artoo.

Eventually the Rebels get the supplies to the planet, the ship is destroyed and SCAR Squadron lick their wounds, but Vader is displeased with their performance, luckily, the Sergeant, despite losing an arm after having to cut it off to escape the ship, has a prize that Vader would find interesting, a Droid that was lost during the evacuation.

This, aside from ‘Vader Down’, at this point is my favourite arc in the run. It’s extremely fun, funny, it’s action packed and full of classic Star Wars feels (the Han and Leia interplay is so good). If this was an animated series this would have been my favourite arc, the whole thing just screams Star Wars.

The art style has changed as well, it’s not so reliant on images from the films being copied, but more cartoonish/stylised and it works really well.

I like getting more new characters, and SCAR Squadron really fill a spot for much needed villains that aren’t Vader, like in Season 2 of ‘Star Wars: Rebels’ there is only so much that Vader can be foiled before he becomes less terrifying for the heroes, so introducing new villains is key, especially seeing as this run is still going strong as almost 70 issues and still set between ‘A New Hope’ and ‘The Empire Strikes Back’. 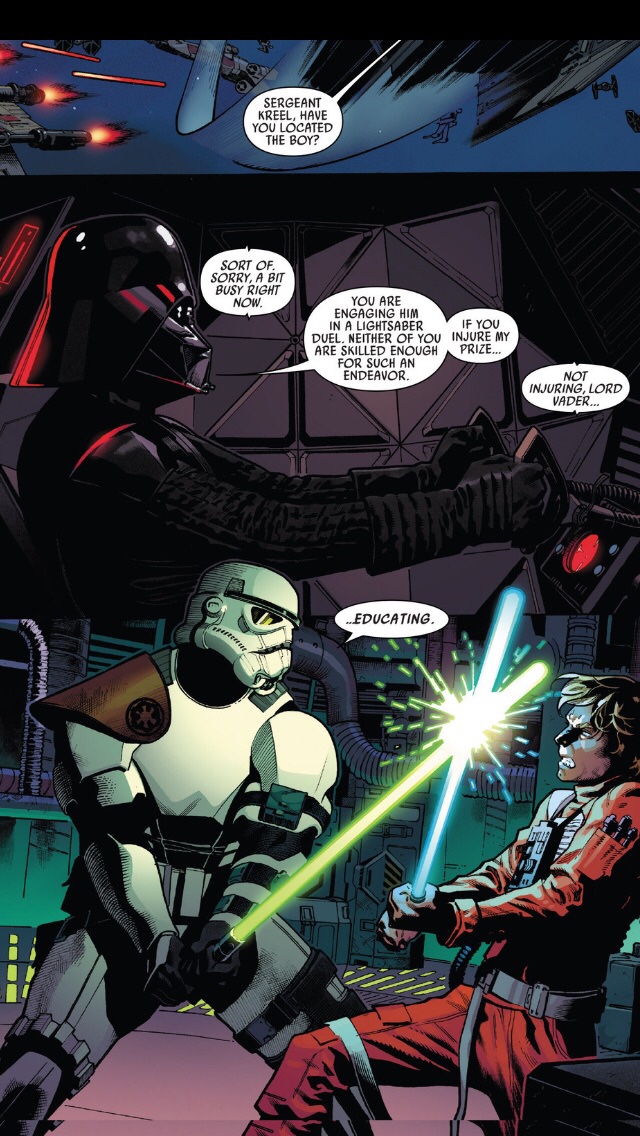 If you’re new to the Star Wars comics, this would be a great jumping on point, not to far into the series that you can’t pick up the older issues but also a solid Story-Arc that leaves you wanting more.