In the first crossover event from the Star Wars side of Marvel we get the Darth Vader we have wanted to see since we first saw him walk into the Tantive IV. Vader is kicking butt and taking names at every turn and he does it with style.

After he is sent into the path of a Rebel Training Mission above the planet Vrogas Vas, Vader decimates multiple X-Wing Squadrons until Luke crashes his fighter into Vader’s TIE Advanced and they crash into the planet.

On hearing this, whilst with the Rebel Fleet, Leia orders the Rebel troops on the planet and they all go into battle, Vader is surrounded but wipes them out with their own thermal detonators.

Vader has Aphra, 000 and BT hunt down Luke and R2, and they manage to take him hostage by disguising 000 as C-3PO. Leia, Han, Chewie and 3PO arrive on the planet with more Rebel troops and Vader makes his way through them before Leia faces him.

Han, Chewie and 3PO look for Luke and end up taking on Aphra and the murder-droids before Chewie is caught in a fight with Black Krrrsantan.

Vader is about to kill Leia but is stopped by Commander Karbin who distracts Vader whilst his troops capture Luke. They fight and the cyborg is defeated after Aphra crashes her ship into him and Vader finishes him off before using the Force to bring down the shuttle Karbin’s troops have Luke.

The heroes escape in the Falcon and manage to take Aphra as a hostage whilst Vader watches them leave.

In all honesty, my brief description does not do the book justice. Jason Aaron and Kieron Gillen have come up with an amazing story that showcases Vader’s brutality and cunning.

Whilst Vader is the main focus of the book the heroes all get their time to shine. Luke’s heroic attempt to bring Vader down and also pushing his story forward by his finding an ancient Jedi Temple. Leia facing Vader and attempting to take his like as he battles Karbin. Han and Chewie taking on Black Krrrsantan and even R2 and 3PO taking on 000 and BT to protect Luke, Han and Chewie.

Not only is the story fantastic, the dialogue really shines, the writers have nailed all of the characters voices and along with the art, which at times looks like they have been drawn from stills from the films, which can be a detriment as it can take you out of the story. 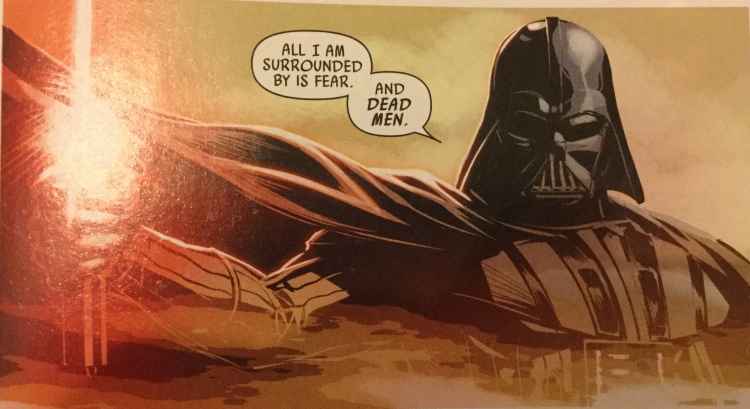 Not only a fantastic story and comic, the first Star Wars comics crossover is a huge success in all areas. When I first read it I wasn’t reading the Darth Vader so I had to do some extra research into Kieron Gillen’s series to find out about the new characters, but having read the first two books of the series before this Volume in my current re-read it makes so much more sense.

This book, as well as Vader’s dogfight in the ‘Star Wars: Rebels’ Season 2 premiere ‘The Siege of Lothal’ where Vader decimates Phoenix Squadron and the now infamous hallway scene in ‘Rogue One: A Star Wars Story’ really showcase Vader as the terrifying character we always dreamed him of being, I only wish we could get his battle scenes from this comic as either a film or animation because it would be amazing to see. This book is a must read for Vader fans, whether a comics reader or not.